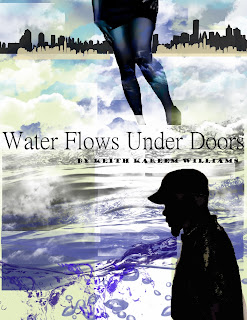 SYNOPSIS: Water Flows Under Doors is a gritty urban tale that tells the story of a young man who believes he has lost his woman to another man when in fact, he has lost her to herself. To cure his addiction for this woman he becomes addicted to another and just like a new drug, this high is more potent than the last. However, what he’s found in this new woman may cost him his life as well as hers.

Cigar trash littered the front of building 1003 as wise men sat and stood, here and there, engaged in marijuana induced, green haze meditation. Bush clouds crowned their heads as they stared blankly into oblivion, engrossed in silent contemplation. It was a circle of soldiers on break from the battles they fought diligently every day. Their battleground was the streets in which they waged war every day in a conflict they’d been losing forever.
– taken from Chapter 1 – The Zoo

Rose knew that neither of her sons would hit her the way their father had so many times. Through watery eyes they had seen her beaten bloody and sprawled out in pools of tears too many times. For what she suffered and for her scars, (seen and unseen), she sometimes inadvertently made the physical reminders of her abuser pay for the sins of their father.
– taken from Chapter 1 – The Cage

Tyler’s eyes wandered then focused on dark windows, closed doors and brick walls that made him feel like a stranger in a familiar place. It was as if no one knew him here but at the same time, he knew everything about the things around him. Walls may have kept secrets from most but from experience, he knew exactly what truths lay on the other sides of them. As he passed a first floor apartment building window, he thought he could hear a man softly kissing a woman. In another he imagined he heard a woman crying quietly and he knew that she had been there alone for some time. As Tyler walked alongside a private house he could see the matriarch of her family close her eyes, never to open them again. He could taste her first kiss and smell the spring air decades ago when she conceived her first child. He could touch the tears on the cheeks of her children when they found her empty body in the morning. If he listened carefully, Tyler could hear the woman whisper her last words in his ear and he could feel her mourning children’s wails. For a time he imagined he could feel everything for a world that seemed to feel nothing. Whether because he needed sleep or had finally lost his mind, his soul became intoxicated and it felt like the strongest magic. Then, it was over almost as soon as it started and he crashed back to reality.
– taken from Chapter 4 – Fire Escape 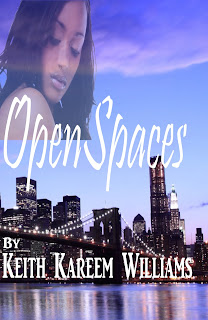 SYNOPSIS: Enter the world of Mika and Sedari, almost the perfect couple. Their love and devotion is almost complete except for the open spaces they have allowed to develop in their hearts. When Sedari's dangerous friendships and Mika's deadly past collide, destructive forces are unleashed that shake their marriage to its very foundations. Can they close their open spaces before they are pulled so far apart that they may never find their way back to each other? Their marriage stands on the edge of the abyss. Can they stop the events that have been set in motion before blood is spilled and lives are lost? "Open Spaces" is powerful, entertaining and honest fiction at its finest.

EXCERPTS:
She didn’t answer his question. Instead, with her eyes wide open, she leaned her face towards his. He leaned back, but not much, and did not pull away when their lips touched. She opened her mouth and softly sucked on his bottom lip. Still, he didn’t resist. He couldn’t pull away because he felt like a mouse caught on a sticky glue trap. That was worse than feeling trapped in a cat’s mouth. Cats caught mice by way of stealth and surprise, but glue traps doomed mice by means of their own folly. "The floodgates to how she had been feeling for so long were now finally open. She had been fighting a quiet battle with the same demons for so long that it was a relief to finally admit it. Her heart was weary, heavy, and ached so badly that she wished her husband would just reach down and rip it out of her chest. At that moment, she would have died, but with her last breath, she would have thanked him."
Finally, when Desiree tried to open his mouth with her own, he gently pushed her away. His heart raced as the taste of her mouth lingered, so different from his wife’s that it excited him. The smell of her was different. The way she kissed was different. Everything that was different about her set his senses on fire, and a dangerous curiosity he thought he’d conquered long ago broke the surface of his psyche like a shark’s fin in water seasoned with blood. His reaction wasn’t the one she had desired, but she knew she’d succeeded in one aspect. Although it was his loyalty to Tamika that stopped him, Desiree knew it was thoughts of being with her that coursed voraciously through his mind and boiled his blood. She thought that he felt feverish as her fingers fondled the side of his face. She knew he wanted her. She knew this because he couldn’t, or wouldn’t, look at her."
- Taken from CHAPTER 4 - Sin a Little Sin


The floodgates to how she had been feeling for so long were now finally open. She had been fighting a quiet battle with the same demons for so long that it was a relief to finally admit it. Her heart was weary, heavy, and ached so badly that she wished her husband would just reach down and rip it out of her chest. At that moment, she would have died, but with her last breath, she would have thanked him.
- Taken from CHAPTER 12 - Love Me or Love Me Not

Once Mika opened the box, she couldn’t stop the torrent of tears that streamed down her face when she recognized every one of the items inside. There were trinkets, notes, love letters, poems, and small gifts that they had exchanged years ago. She felt like she was being bombarded by too many repressed memories all at once. The entire situation seemed like something out of a storybook, and she prayed that no one turned this particular page. This moment she could live in forever.
It had started to drizzle, and she imagined that the rain droplets were the tears of the reader as they hit the page and soaked them. She felt like the breeze that now shook the barren branches of the trees around them was the breath of a woman who now read the words of her story and pretended to be her. The rain droplets were cold, but the air was warm. Mika imagined that the heat came from a woman whose heart now burned as she reminisced about being in such a situation."
- Taken from CHAPTER 18 - The Fight 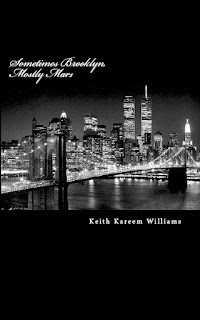 
EXCERPTS:
Written on Her


She’s got my lines, verses & chapters written all over her; from her neck, down her spine, to the top of her panty lines. She’s got my paragraphs etched on her thick hips and she recites the words I write with sexy lips. (I’m going to give up writing on paper.) - Taken from Chapter One - Inception

Reader Writer Relations
I walk directly through your eyes so I can touch your mind. You lift up the covers to see my words. I can hear you whisper them aloud and I can feel you when I sleep. Even though we’re strangers, it’s our way to touch. You keep reading, I’ll keep writing and I hope I’m giving you enough. (If you’ve read, bought, borrowed, or stolen a copy of any of my books, thank you.)


- Taken from Chapter One - Inception

What Sense?
What do you do when she haunts you? You smell her perfume in the bedroom long after she’s gone. At the same time, she’s home in hers and she’s got the pillow between her legs wishing it was you. Does it make sense to be apart? - Taken from Chapter 3 - Haunted

SYNOPSIS: In the middle of the night, our unnamed protagonist wakes to find Diana’s gun pointed at his head and he recognizes bloody murder in her eyes. While facing a scorned woman’s wrath, many of his past entanglements replay in his mind. Memories of women he has loved or refused to love surface like ghosts from the grave to haunt what could be his last moments. As he tries to reason with her for the sake of everything he has to live for, he realizes that there is so much that he deserves to pay for. Love, guns, sex and bullets can all be deadly in the wrong hands.


EXCERPTS:
There are moments in your life that change you because of the power they possess. Never let these moments hold you prisoner but for nothing and no one should you surrender them. They make you who you are. Those are the last bits of real magic left in the world. - taken from the chapter titled, Her Tears for My Life

That was the last time I ever showed up to interfere in her life because I wasn't selfish enough to stay in it. By her own doing, her love for me had locked her in a cage even though I did not wish it so. - Taken from the chapter titled, Of Flowers and Birds

If a mirror falls to the ground and smashes into a thousand pieces, we can put it back together but the reflection that we have to stare at after will never be the same. Each shard represents and reflects a different direction our lives may have taken if it wasn’t a flawed piece of shattered whole. - Taken from the chapter titled, Broken Things