I won't tell anyone that you're still afraid of thunder and lightning if you won't tell that I still wake up in cold sweats from my nightmares. I will never tell another soul that you're lonely if you let me keep you company when the weight of the silence is too much. Because you're nowhere near right now, I turn everything off so I can hear your voice in the rain. The sound is so clear on that cloudy day that I didn't have to strain to understand everything that you'd never say out loud. The same water falling on you is the same water falling on me. We're both caught up in our own thoughts about what we are now as opposed to what we could be. I use the ink from my pen to form these words scrawled on blank pages. It's my interpretation of what I read in the downpour. Later on tonight you'll be curled up in bed with a pillow between your legs wishing it was me. If you wouldn't fight with your conscience and come over here… then it really could be. 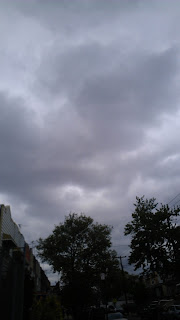 I should have finished writing this book months ago because writing things that really happened is much easier for me than inventing compelling prose drawn entirely from the depths of my imagination. The only difficulty should have been cleverly masking reality in a thin veil of fiction to keep the real characters from quickly recognizing their counterparts on my pages. All the same, I've struggled at times and for a while I couldn't figure out why. The story is always on the surface of my psyche, waiting to be told but on so many nights I just couldn't write. I wasn't able to pen the words with any semblance of consistency. Recently, I've finally figured out what's wrong. Something is missing and I'm mad at myself for not sensing what was lacking sooner.

I always sentence myself to solitary confinement when I write. Even if I'm scribbling chapters in my notebooks with people's bodies pressed in around me in the confines of a crowded subway car, I find a way to block out the rest of the world. It always feels like I'm holding my breath underwater. The problem is that I haven't been coming up for air and I've been running the risk of drowning. I worry too much about whether or not people will understand or appreciate this book in the same way they did with the other books I've written. I question every chapter, sentence, paragraph and word. I'm trapped underneath the waves of self-doubt even though I shouldn't be. Finally I've decided that the key to my problem is that I'm missing my muse. I've pushed this reality to the back of my mind, over and over again. I've done everything to tell myself that the idea of needing a muse is just a silly notion conjured up by my overactive, romanticized writer's mind. Of course, as is the case with a lot of things, I've been wrong to ignore this.

Who else but a muse is going to motivate the ink to flow from my pen at the proper pace to carefully put the right words in the proper places? Only a muse is going to inspire the concentration it takes to scribe the things I need to say, exactly the way I meant to say them. Only a muse's tears on the pages that were meant to be sad can let me know if I'm getting it right. Who else is going to let me know when I don't have the right vibe or complain when I've taken the story completely off track? In the end, who else is going to be brutally honest, not to be cruel but because they expect the best from you? The problem is that not just any muse will do. It makes me sit back and wonder if I need you and if that's true………

Only you know if you think about me every day. Another soul would never know if you check every alert on your phone as if by some miracle it could be me calling. You would never tell anyone whether or not you have to fight the urge to call me. There's not another person alive who knows about the secret, slight, subdued moment of excitement when you catch a glimpse of me online. Only inside your mind you still anticipate the end of my sentences, hang on the words, finish my thoughts or think the same things I'm thinking. Only you know if your heart would jump out of your chest if I would just say hello. You're the only one who knows if you ache for long nights in .

Those are all the things for you to know because you'd never share those things with anyone…not even me. (Stop me if I lie.) 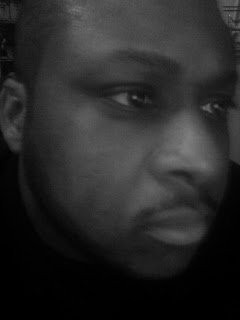 ***As I promised earlier....well, as I promised a few days ago....here's another sample of the new book. (Still raw and un-edited but....enjoy.) Feel free to leave comments and feedback. ***

An iron maiden is an early 19th century torture device consisting of an iron cabinet with a hinged front, tall enough to lock a human being inside. Once the victim was immobilized in the cruel contraption, iron spikes were driven through the openings in the casing to pierce the flesh of the person locked inside. 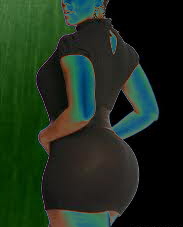 *** Well, hope you enjoyed this sample too. There are a few more "goddesses" to share but I think you'll have to wait for the official book release/reading for those. For now....it's back to the lab trying to finish this up.***


COMING SOON
Posted by Reem the Gully God at 2:20 AM 7 comments:

An idea is like air. It is intangible and invisible. The only way to know that it even exists sometimes is for some type of movement to turn something was that otherwise intangible into a draft, a breeze, a strong wind or a hurricane. Ideas die quickly if no action is taken to make them tangible. The whole world is full of ideas that never reach their potential because most people never take steps to make their dreams become reality. If you find yourself in a circle that kills your creativity…get out of that circle as fast as you can.
I've always been a person that believed that if I wanted something done right, I'd have to do it myself. That was partly because I was surrounded by too many "talkers" and not nearly enough "doers." I'm more careful about the type of folk I allow into my circle. There is nothing better than ideas bouncing back and forth between people who are passionate about what they do. This is exactly what transpired when I shared my vague vision of what I wanted the cover of "Glass Goddesses, Concrete Walls" to look like with Am W. I appreciate her work ethic, respect her passion and greatly admire her talent. When she makes up her mind to do something….she gets it done with the enthusiasm of someone who truly, deeply, loves what they do. I put the creation of this cover totally in her hands and she took it to another level. When I saw the finished product it inspired me to work even harder to finish the novel. Now that's a good person to have in my circle.
Follow the link to read where I interviewed her for the blog:
﻿http://thegullygodchronicles.blogspot.com/2011/12/get-to-know-amw-of-estetika-exposure.html
Take a look at her artwork:
http://www.estetikaexposure.com/
***In the meantime...let me get back to finishing up this novel so I can have some amazing prose to go along with this gorgeous cover.***
Posted by Reem the Gully God at 4:30 PM 6 comments:

***Yesterday I promised to feature Gia from my new book but while working on that chapter last night, I realized that it still needs a lot more work. I'm not a man to go against my word often so...I'll introduce you to Jasmine instead.***

Enjoy this preview of "Glass Goddesses, Concrete Walls" taken from a chapter titled: Of Flowers and Birds. 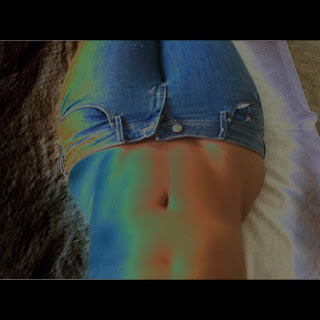 ***I hope that this has wet your appetite to read more. I'm working hard to finish this up soon. As usual, feel free to leave comments and feedback. Thanks for reading***

While you're waiting for me to finish up my latest...here's the link for the books I've already released: http://www.amazon.com/-/e/B0063K6JJC

***Just as I promised, here is a sneak preview of one of the chapters of my new book, "Glass Goddesses,Concrete Walls." Enjoy and leave comments if you like.***


Intro
Many years ago I saw the darker side of life through the eyes and life of a raven. We don't always want to abandon the things we leave behind but the weight of everywhere we've been and everything we've done can equal tons. Not everyone you meet will be able to see differently or be able to necessarily comprehend the things that you see. When someone does, cherish them. When they don't, you have to walk away…quickly. 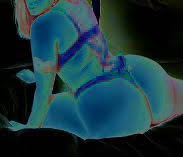 Written on Her
by Keith Kareem Williams 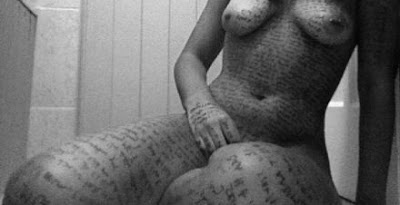 "She’s got my lines, verses & chapters written all over her; from her neck, down her spine, to the top of her panty lines. She’s got my paragraphs etched on her thick hips and she recites the words I write with sexy lips. (I’m going to give up writing on paper.)" - excerpt from my 3rd book titled "Sometimes Brooklyn, Mostly Mars." 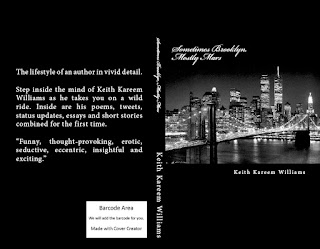